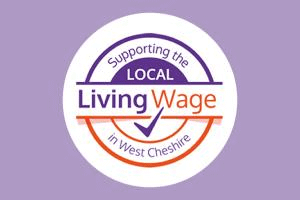 The Local Living Wage is a movement of businesses, organisations and people who believe a fair day's work deserves a fair day's pay.

We are looking for employers willing to lead the way in making west Cheshire a place where everyone can earn a decent living.

As the cost of living increases, many families are struggling to pay for the basics - to heat their homes or put enough food on the table. The Local Living Wage is currently set at £9 per hour for employees aged 18 or over in west Cheshire, a rate based on the real cost of living for employees and their families in the borough. This is assessed annually and implemented in April.

Paying a fair day’s pay for a fair day’s work is a serious start in the fight against poverty. It is good for society and will boost the local economy as residents have that little bit extra in their pockets to live well.

The Local Living Wage rate is different from the National Living Wage of £8.21 per hour for people aged over 25, a mandatory rate set by government and formerly known as the minimum wage.

Annual contracts and other packages

Ad-hoc support and other services